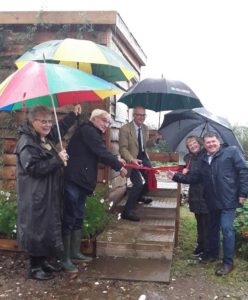 “We were very pleased to be able to assist in the funding of the second composting toilet at Rhubarb Farm (https://rhubarbfarm.wixsite.com/rhubarbfarm) which increased the client base Rhubarb Farm is able to serve. Four Winds Director Eddie Peat attended the official opening of the toilet. This one composting toilet will save on the use of an estimated 86,400 litres of clean water each year and therefore makes a real contribution towards sustainability and resource conservation.

We look forward to receiving applications from local community groups for funding to support the projects they are aiming to implement. Details are available on the Four Winds web-site.”

Four Winds has allocated grant funding to Rhubarb Farm at Langwith and the Oxcroft centre at Oxcroft. Both of these are in former pit villages within the community zone around Duckmanton. 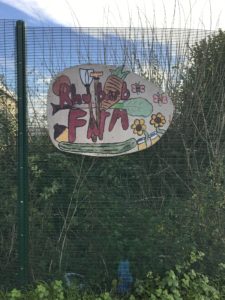 The Rhubarb Farm application was for a second composting toilet for the Rhubarb Farm project. The project provides a facility for disadvantaged members of the community both near to and more distant from the farm at Langwith. Clients are able to benefit from outside activities tending the garden and growing fruit and vegetables for the local community. The grant for Rhubarb Farm was £3,500 and a new toilet has been installed. This was a contribution towards to the total cost of the project. The provision of the toilet allows Rhubarb Farm to increase its client base in a sustainable way. 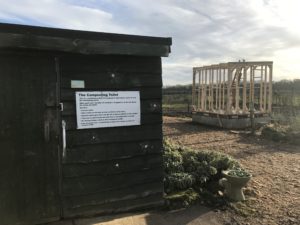 The Oxcroft centre is a former miners institute at Oxcroft. Whilst the building was relatively modern, built in 1994, it has some aged electrical systems. An application was made by the centre for replacement of internal lights with LED’s. Grant of £1,781.35 was agreed and this has been paid following completion of the works. This enables the Oxcroft centre which is run by volunteers for local communities around it to reduce electricity costs. 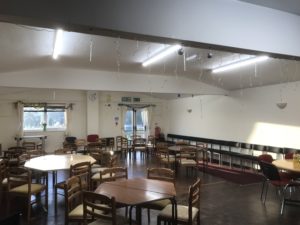 L.E.D Lighting at the Oxcroft Centre

PRIMARY SCHOOL REAPS THE REWARDS OF BOTH WIND AND SOLAR ENERGY 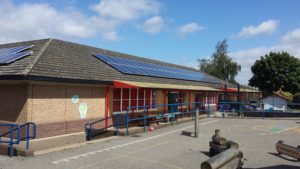 Four Winds Energy Co-operative has supported the installation of solar panels on a local primary school at Duckmanton The solar energy system was installed in August this year and enable the school to reduce its energy costs.

Four Winds has developed co-operatively owned wind turbines on former colliery sites, with the aim of bringing benefit to the local communities. During the summer of 2014 a successful share offer raised £3.4m from members of the public with an interest in renewable energy.

Using these funds, Four Winds has built two 500KW wind turbines, one located at Duckmanton near Chesterfield and one between Grimethorpe and Cudworth called Shafton Turbine. The Duckmaton turbine started generating electricity in December 2014 and Shafton in July 2015. Income is derived from the sale of electricity and from the Feed in Tariff.

Four Winds gives a portionof the income to a community fund and this money has been used to support the installation of solar panels on the local primary school at Duckmanton, by providing the annual maintenance costs. The panels have been installed by Schools Energy Co-op, a similar style of co-operative to Four Winds which utilizes solar. In addition, Four Winds has organised visits for local school children to the Duckmanton turbine.

John Malone, Four Winds Director said” It’s very rewarding to see the community benefits materialising from this project. Duckmanton school overlooks the wind turbine therefore it makes perfect sense for them to benefit from the funds generated. The solar panels will provide clean, green electricity free of charge to the school for the next 20 years. This is also a perfect example of co-op helping another co-op. Four Winds intends to offer further school site visits.”

Manage Cookie Consent
To provide the best experiences, we use technologies like cookies to store and/or access device information. Consenting to these technologies will allow us to process data such as browsing behavior or unique IDs on this site. Not consenting or withdrawing consent, may adversely affect certain features and functions.
Manage options Manage services Manage vendors Read more about these purposes
View preferences
{title} {title} {title}